From PGVWiki
Jump to navigation Jump to search

Media traditionally referred to the form, rather than content of a work of art. Canvas or paper are the media which convey a painting or a story. Recently, however, the word is also used to designate the content: both "file formatted as jpg" and "Photo of my aunt Matilda" can be designated as media. To add to confusion, PGV stores pictures in "Media Objects" which are sometimes referred to as media as well (see article discussing top level Gedcom objects). In the following we will try to distinguish Media (generic name: Photo of my aunt Matilda) from Media Files (any file that contains something worth showing, for example My_Aunt_Matilda.jpg) from Media Objects (a Gedcom object with ID=M123 entitled Aunt Matilda in a baby carriage).

PGV version 4 and higher includes Media Objects as separate entities. Media (photo, film, voice recordings etc.), stored on disk as Media Files are attached to Media Objects, and those are referenced wherever media are called for. A Media Object has the following attributes:

ID
Unique ID within a single Gedcom. When you add a new Media Object, its ID is assigned automatically.
File name
The Media File name. The file names have must be unique within a directory on the server, and there can be many subdirectories. PGV actually manages two files with the same name, original file and the reduced-size thumbnail in a subordinate directory.
Directory on the server
The file location on the server. If the administrator allowed, you can select from available directories
Format
Format of media, specified as file extension. PGV understands many media formats, and can display images, sound files, moovies etc.
Type
Optional, but possibly useful. You can select from a list, e.g. photo, document, certificate etc. Paintings are not included, but you can add it and any other type by editing the Gedcom fragment manually.
Title
Title should be short, since media are sorted and displayed by title - typically one line. You can put more data in Notes
Note
The extended description of the media goes here: who, where, when, etc.
Source
Like in all other objects, Source is and important piece of information, and should always be added if known.

Media Objects can be referenced in more that one place, for example a single group picture (single media object) can be linked to all persons visible on this picture.(TBD)

You can add (Upload) one or many Media Files to the server using the Upload Media files function, or you can add Media to top level object of event, by simultaneously creating a Media Object and uploading Media File. You can also rename and delete a Media File that already exists on the server.

When you have a number of files, it may be useful to upload them using the Upload Files facility. In this case you are only copying the files to the server, without creating the corresponding Media Objects, which must be done later. Select the MyGedView Portal menu, Manage Media submenu, Upload Media files function. The form allows you to upload multiple files.

You can delete, rename and move a Media File. Be forewarned, that deleting files works differently from deleting Gedcom entites - the action is immediate, and the "Approve Edits" does not work here.

You can add Media Objects to top level objects (People, Families and Sources) and to all Evants / Facts. Look for

In each case you have also a choice to link to an existing Media Object. After clicking on one of those items, you will be presented with a Media Item screen with the following items:

The Manage Media form displays both Media Objects and Media Files, using either the Media Object Title or File Name as sort and search filed. You can limit your display by entering part of the filename in the Filter field. You can distinguish the "naked" files by the lack of Media ID (a psition that looks like "(M283)", and lack of "Remove object" item on the left. Clicking the "Edit" will invoke the "Add new Media Item" screen, with the file name already filled in. Proceed by filling the data fields as described above, whhich should result in creating a Media Object.

You can delete or rename a Media Object. The Delete option will not work if the object is liked to other items; you need to delete the link. Renaming is a little tricky, since there is a possibility of a collision with a name of another Media Object. The results are often unpredictable: the rename may not be succesfull or the object disappears, orphaning the file.

Places media can be used

Media Objects can be attached to top level objects: Individuals, Families, Sources, as well as to all Facts and Events. You can attach a Person, Family or Source to a Media Object, or an Object to Event, Person, Family and Source. One can force PGV to use one of these images as the main picture by setting the "highlight" option (see below). 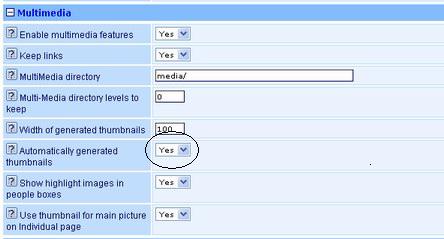 Rules for selection of image for display 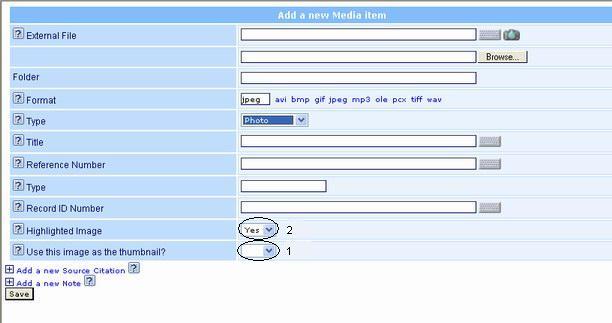 The settings on all media files within the Indi page's Media tab help determine which image is chosen as the one to use for this individual. Here are the rules, straight from function find_highlighted_object() in functions.php:

Rules PhpGedView uses to decide which is the highlighted media object

This section needs to be reviewed / corrected by knowledgeable developers.